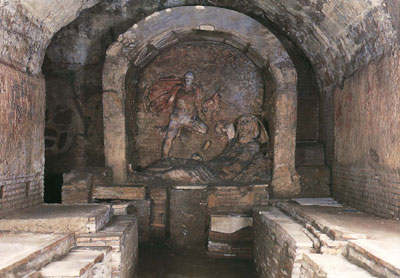 The Mithraeum is on the east side of the crypt, beyond the foundations of the apse. It faces east, i.e. towards the point of the rising sun, where the altar is situated.
QThe temple measures 11 by 4.5 metres. The roof is the shape of a barrel vault, originally painted blue; there are raised platforms along the walls, sloping backwards, 1,35 metres wide and 0.75 metres high. There is an aisle running along the centre which is 1.60 metres wide. The podium on the right is 7.50 metres long, while the right podium measures 6 metres in length.
The god Mithra is shown slaughtering the bull, symbol of evil, after having captured it in a cave. Mithraic mythology narrates that Mithra carries out this task with the approval of the universal gods. Oceanus or Neptune can be seen represented as a river divinity. The dog that was Mithra’s faithful companion during his search for the bull is also depicted. The point of the bull’s tail is shaped like a large wheat ear, symbol of the fertility and flora flowing forth from the blood of the slaughtered animal.
Of all the known Mithraea, this one situated by St. Prisca is the most complete. In addition to its almost total preservation and its frescoes, it has notable adjacent premises which further prove that this is an authentic ‘Mithraic Temple’.
On the left side of the temple there are three rooms: the dressing room or Apparatorium, where the ministers put on their robes and from where they came out in procession to begin the religious functions; the room of Caelus or the baptistery where there is a vault, at the bottom of which there is a prominence which appears to be an altar with an alcove, at the feet of which there is a type of large basin which no doubt contained the purifying water for the initiations; and lastly the room of the Initiations, where the initiated underwent the various ritual Mithraic trials of cold, of the blood of victims sacrificed before the god Cronos and preserved in the jar, to this day buried under the flooring.

The Mithraeum is managed by the Rome Superintendence. In order to make an appointment for a guided visit, please contact:

e-mail This email address is being protected from spambots. You need JavaScript enabled to view it.